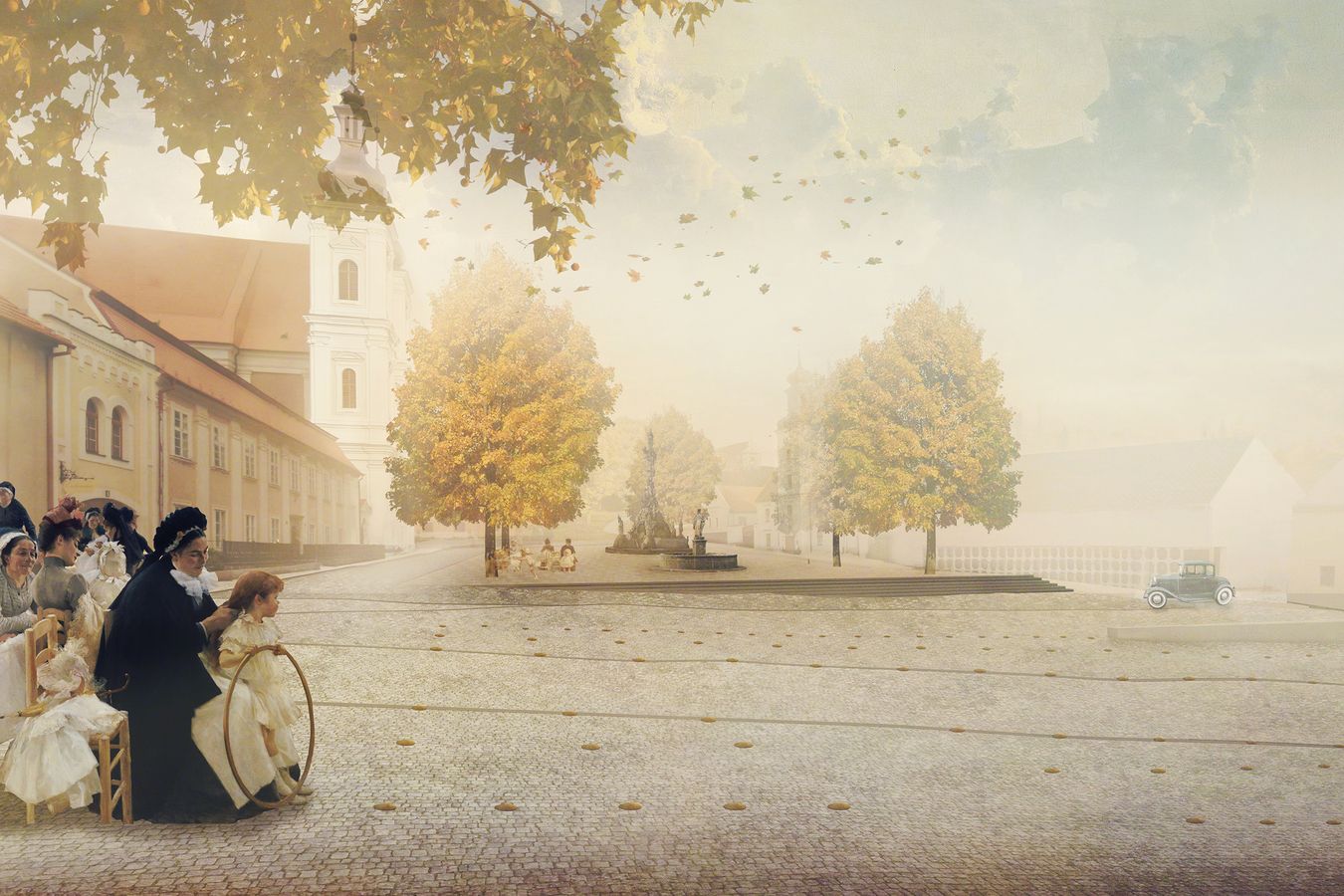 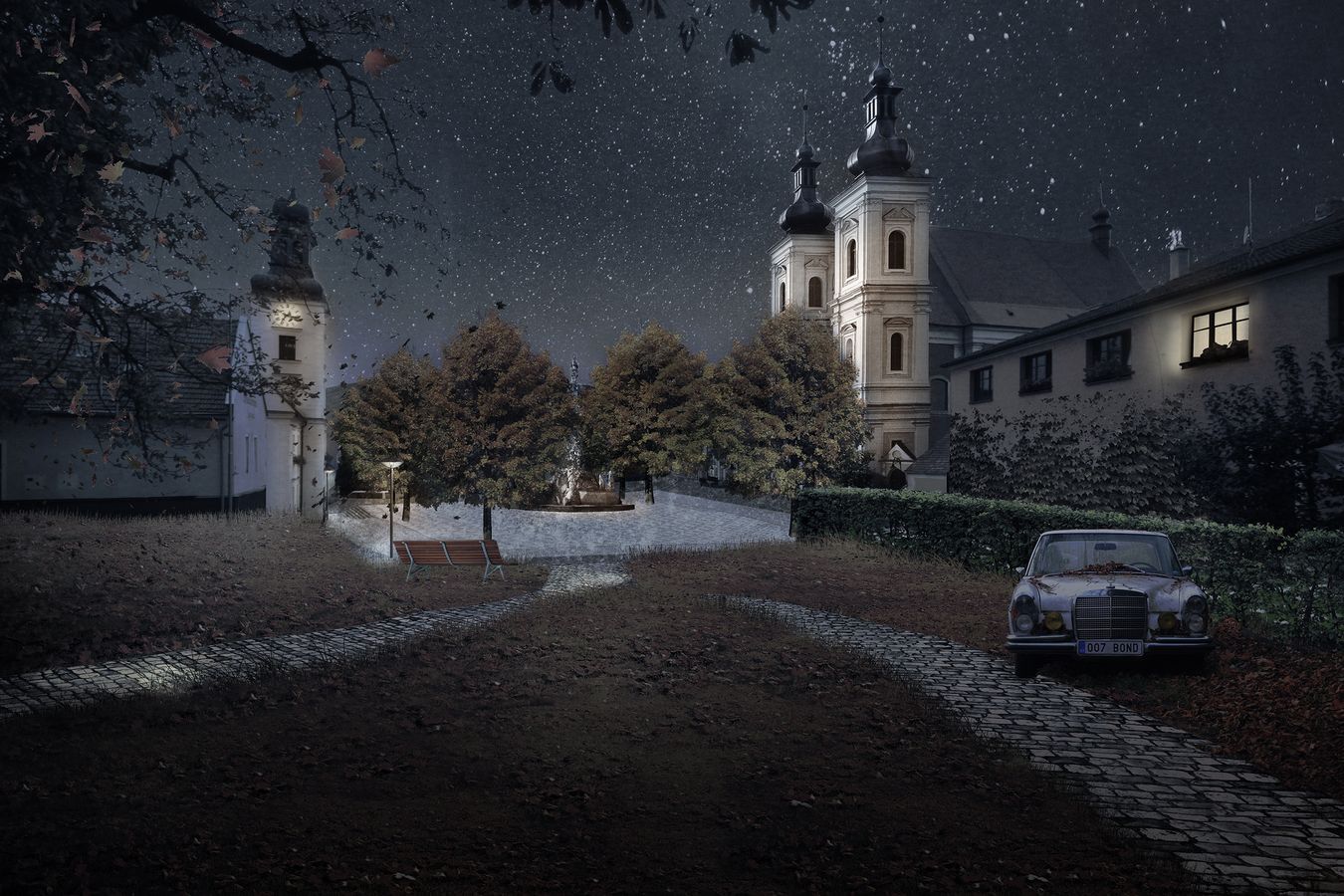 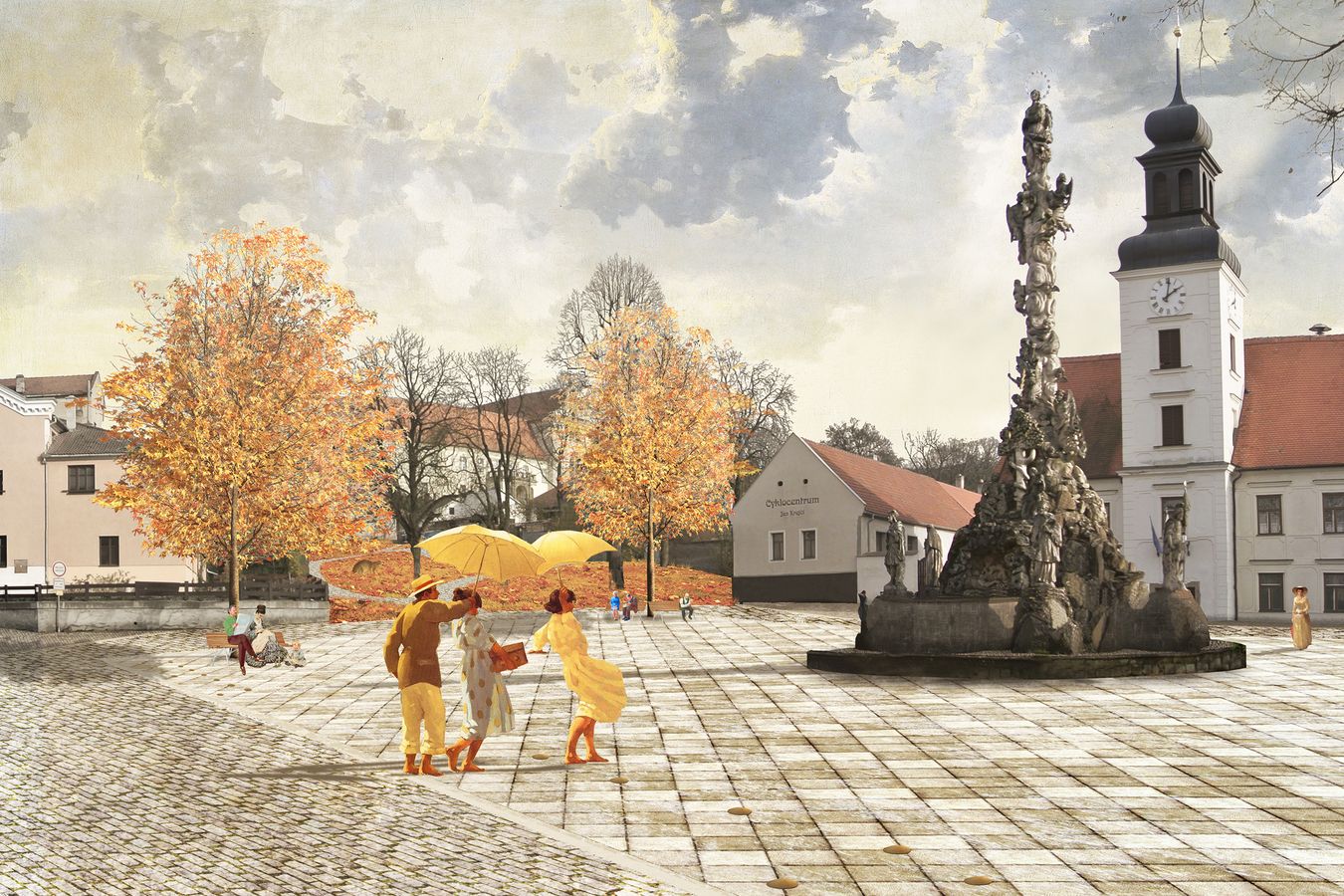 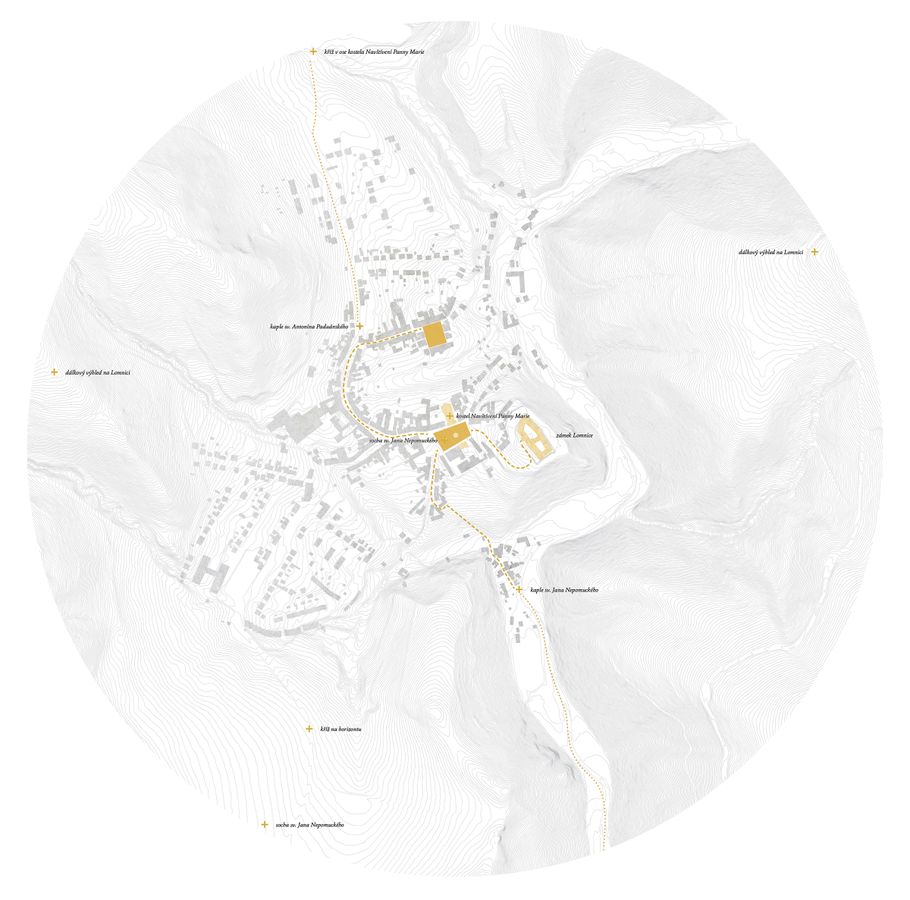 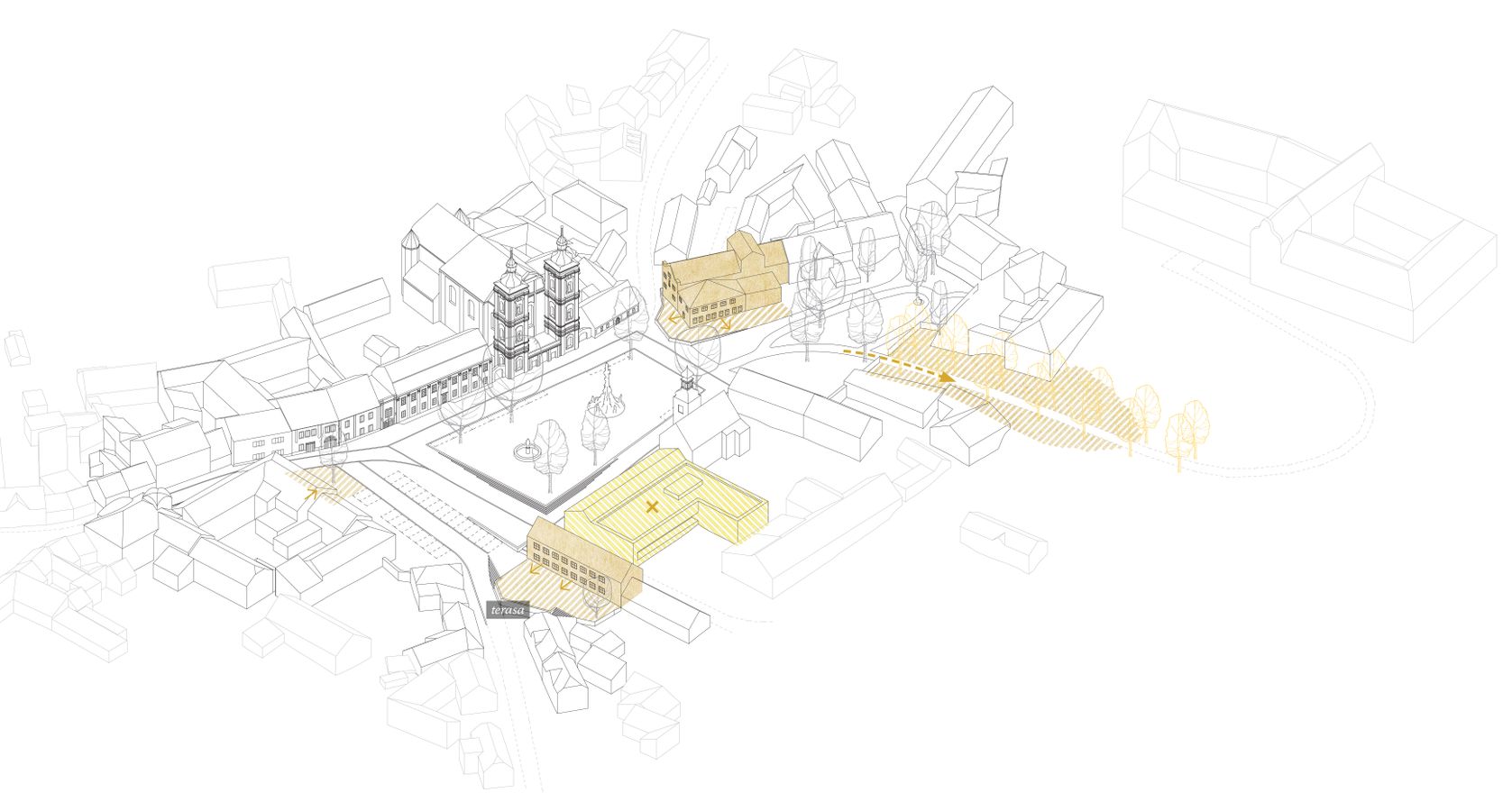 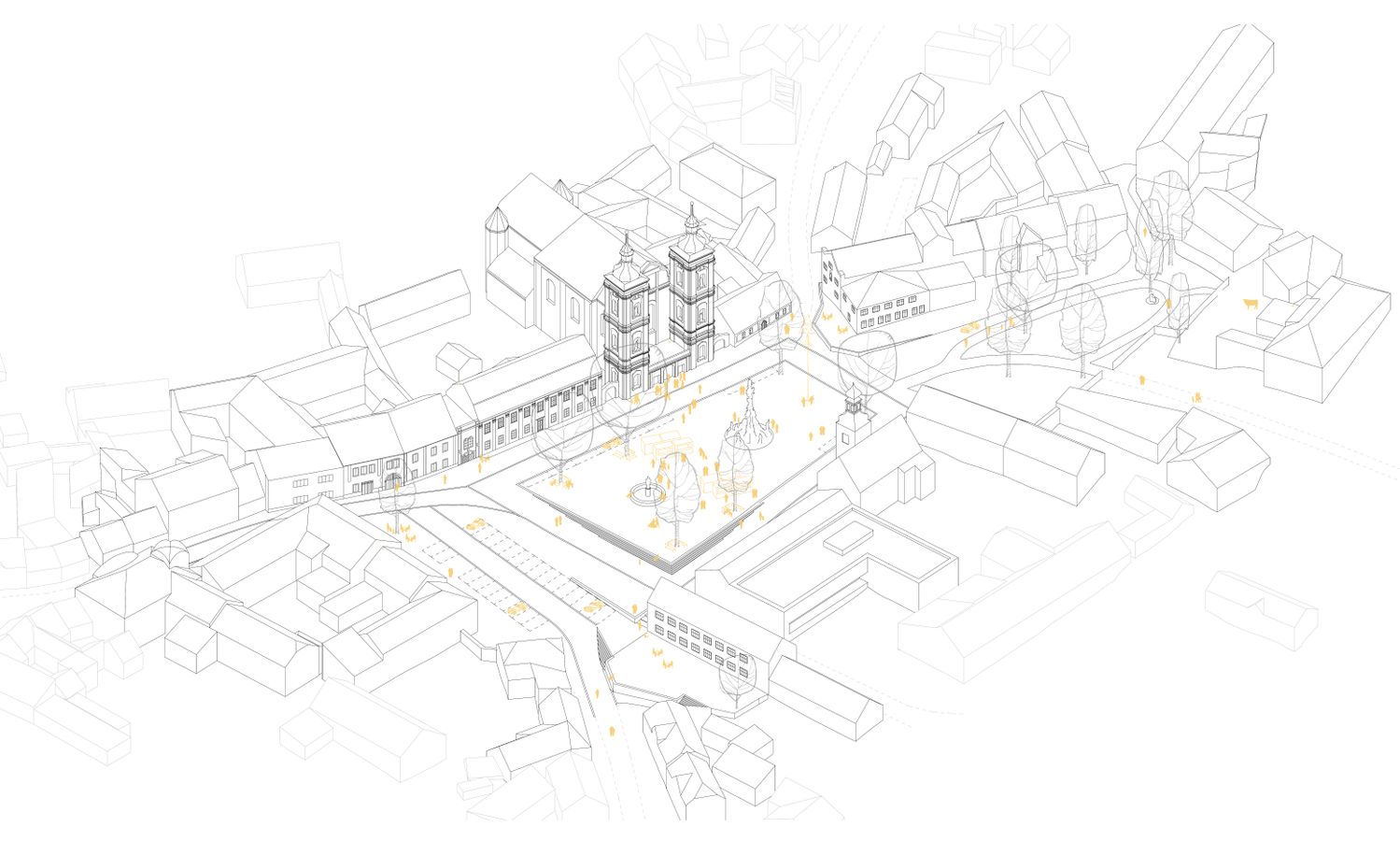 Looking for an answer to the reconstruction of the Baroque square led us to a seemingly sleepy small town on the outskirts of the Vysočina Region where we started to perceive a strong Baroque concept, conceived centuries ago by the Count Serény. The concept makes the square a triumphant courtyard located on the way to a chateau on the hill. This also makes the front facades of the church and the town hall geometrically determine the position of a Marian Column, creating an imaginary cross-shaped space on the square, which a person has to pass through on the way to the chateau. The result is very theatrical and self-centred. Following Baroque traditions, it engages the surrounding areas to create points of interest in the landscape and along with the local pathways and long-distance viewpoints, this spatial scheme celebrates the harmonious relationship between a man and a landscape.

The self-admiration, but at the same time, strong quality of that place has been received. Our proposal deals with the thoughtless interventions which have been introduced around the existing square over the years and responds to the local complex morphology makes the square slightly sloped (in some parts almost steep). We divided the space into three parts which differ in character. The part where the entrance to the square is located was necessary to leave by as a passable road for cars and other means of transport, making it reserved for service operations. The part on the other side of the square surprised us by the seemingly unwanted character that made us feel as if it did not belong there. The place has the character of a village square, where fully-grown trees cast shadows on a surface which can be easily overlooked. Bearing this in mind, we decided to unify the square surface with a pavement following the spirit of previous Baroque planning. We proposed placing a solitary fountain with a statue of St. John of Nepomuk on the axis which intersects the square, thus creating another a point of interest in the area. The assemblage of fully-grown trees was completed by adding two more, so that the imaginary cross-shaped surface can dominate the whole square.